What is nudging and how can you use it to improve hand hygiene. How can Sani nudge nudge?

You can see how to activate nudging here

Nudging is a behavioral Science term that refers to the use of positive interventions to motivate people to perform in a specific way. The Sani sensors can nudge when healthcare workers might be in a situation where they should sanitize and nudge when they have sanitized. This is called for Cue and reward and is a basic part of the Nudging Principles from Behavioral science.

# 1 TRIGGER: People interact with what is visible in the local environment - and we often have to remember our good intentions.

# 2 REWARD: People need rewards for their behavior, and an obvious version of that can often be feedback - you did well here! 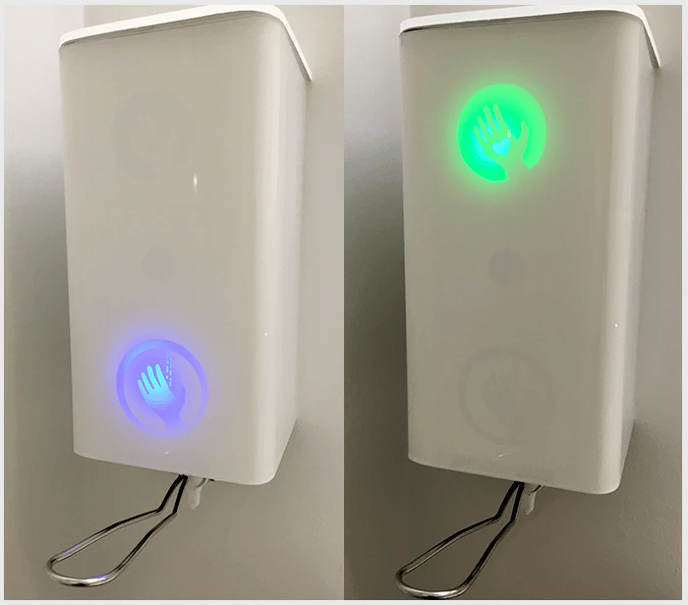 This is the first prototype of the Sani Sensor's nudging mode

How Cue and Reward works now.

The trigger is an animation that happens as a person is close to the sensor on a dispenser. This can be as they walk past the dispenser while entering a patient room or in the hallway or stand at the dispenser in the medication room or toilet. The purpose of the trigger is to bring the person's attention to the dispenser, which will prompt the person to consider if they should use it or not. It is important to understand that the trigger is not an alarm. It is an "attention getter" that reminds the person to think about hand hygiene and make an active judgement if the person think they should perform hand hygiene or not. This will make them try to remember the guidelines and this brain exercise will print a behavior to make this consideration every time they see the dispenser.

You do not have to wear a Sani ID to activate a Trigger. Every movement of persons larger than 40 kg will activate it. The sensor only records the usage, if you are wearing a Sani ID.

The Reward is an animation that happens when a person uses the dispenser. The purpose of the Reward is to activate a pleasant association with performing hand hygiene. "You did good" is the feeling the person should feel when receiving the reward. The reward is given every time the dispenser is used and not only when it was used correctly or in a compliant situation. The reason behind this is that there needs to be a consistent positive association with performing hand hygiene. If you only get the reward when you perform hand hygiene correctly, but you do not know how to perform it correctly, you will start to doubt yourself and eventually avoid the feeling it gives you when you perform hand hygiene and are not given a Reward. The brain is not clever enough to understand the association and will eventually fully avoid the feeling instead of trying to solve the equation.

You do not have to wear a Sani ID to activate a Reward. Every time the dispenser is used the sensor will make the Reward animation. The sensor only records the usage, if you are wearing a Sani ID.